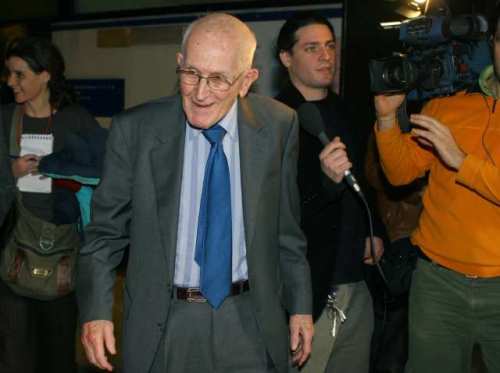 American art dealer Robert Hecht, 86, center, is approached by reporters as he leaves a Rome court for a break Friday Jan. 13, 2006

The criminal trial of Robert E. Hecht ended this week with no verdict, while Giacomo Medici’s conviction for trafficking looted antiquities was upheld last month by Italy’s high court.

Here is Jason’s story in the Los Angeles Times:

The trial of Robert E. Hecht Jr., the alleged mastermind of an international black market in ancient art, ended with no verdict this week when a three-judge panel in Rome found the time allotted for the trial had expired.

Hecht, a 92-year-old Baltimore native now confined to bed at his home in Paris, has cut a wide swath through the art world since the 1950s, supplying museums and collectors around the world with some of the finest examples of ancient Greek, Roman and Etruscan art.

Throughout that colorful career, Hecht has been dogged by allegations that his wares had been recently looted from archaeological sites and smuggled out of their homeland. It was a claim he never directly denied while maintaining his innocence of the Italian charges, which focused on an alleged conspiracy among dealers he considers rivals.

The ruling brings an ambiguous end to a sweeping investigation that traced relics looted from tombs in Italy through a network of smugglers, dealers and private collectors before appearing on display at museums in the United States, Europe and beyond.

The criminal case stemming from that investigation has dragged through Italian courts since 2005 and focused on Hecht and two co-defendants: Marion True, the former Getty antiquities curator, and Italian dealer Giacomo Medici.

True’s trial ended without a verdict in October 2010 when the statute of limitations on her charges expired. Medici, who opted for a fast-track trial, was convicted in 2004, a verdict upheld last month by Italy’s highest court, which imposed an eight-year prison sentence and a 10-million-Euro fine, the largest in Italian history for such a case.

Paolo Ferri, the original prosecutor in the case, expressed exasperation with the Italian legal system, which he said made it impossible to conclude the complex cases in the time allotted. In Italy, months can pass between hearing dates in criminal cases — there were only about 18 hearings in the Hecht case over the six years, Ferri said.

Ferri dismissed critics, mostly in the United States, who suggest that he had purposefully stretched out the cases because he lacked the evidence to convict.

“There is plenty of evidence,” Ferri said, citing as an example Hecht’s own handwritten memoir, in which the dealer detailed his long career buying ancient art from Medici and other suppliers whom Hecht described as “clandestine diggers.” An organizational chart seized from a middleman in the illicit trade showed Hecht’s name at the top of a pyramid of suspected looters and smugglers. 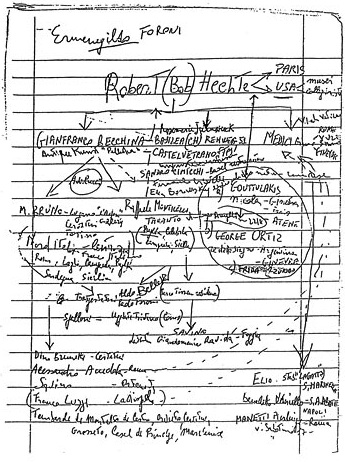 Evidence gathered during the investigation was compelling enough to convince American museums to voluntarily return more than 100 masterpieces of ancient art in their collections after they were linked to Hecht, Medici and other dealers. In 2007, the J. Paul Getty Museum offered to return 40 objects to Italy, including its prized statue of Aphrodite.

Confronted with evidence of their own role in an international black market, American museums also adopted strict new acquisition standards designed to prevent the purchase of recently looted antiquities, the excavation of which results in the destruction of archaeological sites around the world.

Still, the failure to bring the Hecht case to a verdict suggests Italy — whose national police force is widely considered a leader in policing archaeological sites — is still lacking a strong deterrent against further looting, a fact that Ferri acknowledged.

“The truth is the Italian legal system is out of order,” said Ferri, who retired in 2010.

As for Hecht, he said he holds no hard feelings about the arduous trial, which did not require him to attend hearings. In a voice weakened by age, he cited a favorite biblical passage:

“Forgive them, for they know not what they do.”

Hard not to feel like Bob is having the last laugh here. But he didn’t sound well when we spoke, and his wife Elizabeth told me he was happy to have this done before he goes. 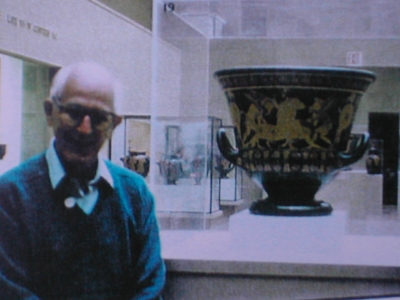