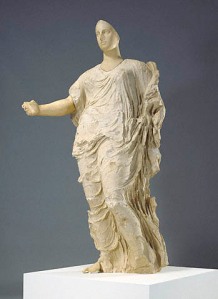 Co-author Jason Felch has a story in Wednesday’s LA Times on the statue of Aphrodite’s return to Sicily. It contains a few scoops from the book on what convinced the Getty board to return the prized statue. Hint: it involves damning photos and the Mafia.

“The J. Paul Getty Museum’s iconic statue of Aphrodite was quietly escorted back to Sicily by Italian police last week, ending a decades-long dispute over an object whose craftsmanship, importance and controversial origins have been likened to the Parthenon marbles in the British Museum.

The 7-foot tall, 1,300-pound statue of limestone and marble was painstakingly taken off display at the Getty Villa and disassembled in December. Last week, it was locked in shipping crates with an Italian diplomatic seal and loaded aboard an Alitalia flight to Rome, where it arrived on Thursday. From there it traveled with an armed police escort by ship and truck to the small hilltop town of Aidone, Sicily, where it arrived Saturday to waiting crowds.

It was just outside this town, in the ruins of the ancient Greek colony of Morgantina, that authorities say the cult goddess lay buried for centuries before it was illegally excavated and smuggled out of Italy.”