The Getty Museum agreed on Tuesday to return two antiquities to Greece and formalized a broad cultural agreement that will lead to loans, joint research and other collaboration with the art-rich Hellenic Republic.

The agreement mirrors similar deals struck with Italy and Sicily in the wake of a negotiated settlement to claims the Getty had for years purchased ancient art looted from those countries. The Getty resolved its differences with Greece in 2007 with the return of four contested antiquities, including a golden funerary wreath. Today’s agreement formalizes that accord.

The returned objects are:

Fragments of a grave stone showing a seated woman (73.AA.115). Under former antiquities curator Jiri Frel, the Getty purchased the object for $20,000 in 1973 from Paris antiquities dealer Nicolas Koutoulakis, who has been linked to the illicit trade in Italy’s investigation. It adjoins a funerary relief currently in the Kanellopoulos Museum in Athens.

An inscribed tablet describing the religious calendar of Thorikos. (79.AA.113) It was purchased by the Getty in 1979 for $50,000 from Jacques Roux, whose name is not familiar to us. Currently on view in the Getty Villa, the object “describes sacrifices and festivals celebrated in Thorikos, in southeast Attica, in honor of local deities and heroes,” according to a Getty press release.

For those keeping score, the Getty has now returned 6 objects to Greece and 43 to Italy since 2005.

A few things worth noting about the deal, which the Getty touts as a “landmark agreement”: 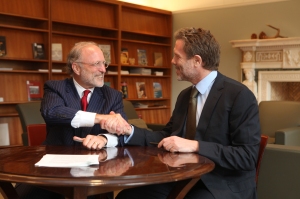 — It was enthusiastically signed by Getty CEO Jim Cuno, who has long been an outspoken critics of repatriations. Before coming to the Getty in August, Cuno railed against repatriation claims from nations like Greece, calling them “nationalistic.” Today he’s shown in a Getty photo grinning broadly as he seals the deal with the Greek minister of Culture Pavlos Yeroulanos, who greatly impressed Getty officials. In an earlier post we asked: “Will the Getty change Cuno, or will Cuno change the Getty?” Looks like we’re starting to see an answer.

— The objects being returned were never demanded by Greece, were not the result of new information coming to light, and do not bear clear signs of being looted. (Thought the role of Koutalakis is certainly suspect.) Indeed, Getty Museum officials recommended their return, according to Getty spokesman Ron Hartwig. Scholars have long known the grave stone fragments matched a stele in a Greek museum. And the inscription’s cultural importance isn’t new. The returns were orchestrated by interim Getty antiquities curator Claire Lyons and her predecessor Karol Wight during informal discussions with Greek colleagues earlier this year.

Our take: The Getty should be applauded for these moves, another step in its embrace of cultural collaboration. But we’re curious: does this set a new precedent for returns by the Getty? For years, the Trust insisted it can only return objects if confronted with compelling reasons, such as evidence of criminal origins. Officials have gone as far as suggesting the museum’s tax exempt status could be in jeopardy if they relinquished objects without a such a cause. We see no compelling demand for return here. Re-uniting fragments and returning culturally important material are laudable moves, but why now? And what else at the Getty should be returned on similar grounds?

Hartwig, who we caught on a bad day, didn’t have a clear answer.