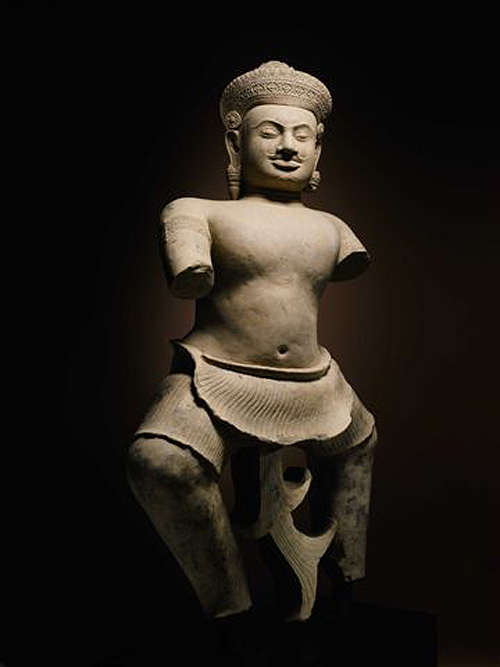 On Wednesday, the U.S. government filed suit seeking to return a 10th Century stone warrior to Cambodia, where it was allegedly looted.

The statue is currently at Sotheby’s in New York, which was set to auction the piece on behalf of a private collector in March 2011. On the day of the sale, Sotheby’s was notified by Cambodian officials that the object had been looted from Koh Ker, an archaeological site 80 miles east of Angkor Watt.

The parties have been negotiating a settlement to the dispute for the past year, as the New York Times reported in February. But those negotiations ended abruptly Wednesday when the US Attorney for the Southern District of New York filed suit. Authorities will seize the statue on Thursday, the Times reported Wednesday.

In making their case for the statue’s return, the US Attorney cites revealing emails from a scholar warning the auction house that the statue should not be sold at public auction:

“The Cambodians in Pnom Penh now have clear evidence that it was definitely stolen from Prasat Chen at Koh Ker, as the feet are still in situ…Please do not give this report to anyone outside of Sotheby, as I often have access to such material, and don’t want to anger my sources. The two Dvarapalas must have stood close together and their feet remain, so it’s pretty clear where they came from.

I think it would be hugely unwise to offer the Dvarapala publicly, and I would not really feel comfortable writing it up under the circumstances. It is also possible that the Cambodians might block the sale and ask for the piece back….I’m sorry as I had some exciting things to say about it, but I don’t think Sotheby wants this kind of potential problem.”

The scholar later consulted with “culture spies and museum director” in Cambodia and told Sotheby’s it was not likely that government would pursue a claim. Sotheby’s proceeded with the sale, with officials saying in internal emails that while it might receive bad press from “academics and ‘temple huggers,'” the potential profits from the sale made it “worth the risk.”

The New York  Times identified the scholar as Emma C. Bunker, an authority on Khmer art. She has written defending the right of collectors to buy ancient art, describing them as “not despoilers of the past but people of great intellectual curiosity who cherished the past long before the world was populated by scientifically trained archaeologists.”

There are frequent references in the federal complaint to another statue looted from the same site at “the museum,” an apparent reference to the Norton Simon Museum in Pasadena, which has a very similar statue that once served as a wrestling figure in Koh Ker. We’ve asked the museum for comment.

The back-story here is interesting: The head of Global Compliance for Sotheby’s is Jane Levine, a former member of the US Attorney’s office now suing for the statue’s return. Levine specialized in making the type of art crime cases her employer is now facing, and has written several articles on international trafficking in stolen art and artifacts. We’ve reached out to her for a comment.

In a statement, Sotheby’s said: “Sotheby’s strongly disputes the allegations made in this complaint. This sculpture was legally imported into the United States and   all relevant facts were openly declared.   We have researched this sculpture extensively and have never seen nor been presented with any evidence that specifies when the sculpture left  Cambodia over the last one thousand years nor is there any such evidence  in this complaint. We have been in active discussions for a year with  both the US and Cambodian governments and  we had assured them that we would voluntarily maintain possession of this statue pending further discussion. Given that Cambodia has always  expressed its desire to resolve this situation amicably, and that  we had an understanding  with the US  Attorney’s  Office that no action would be filed pending  further discussion towards a resolution of this matter,  we are disappointed that this action has been filed and we intend to defend it vigorously.”

HOT DOC: Here is the government’s complaint, which begins citing the internal emails on page 11: