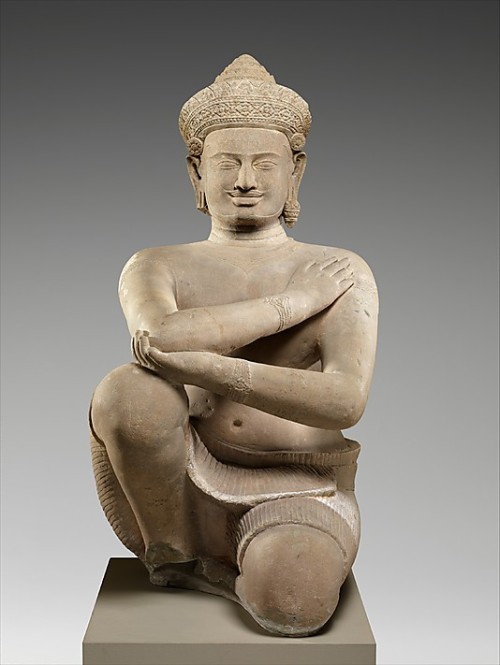 UPDATE: The New York Times reported May 15 that Cambodia is also planning to ask for the return of a statue of Hanuman at the Cleveland Museum of Art. This is in addition to the Norton Simon Bhima and the Denver Rama we’ve written about previously, which Cambodian officials also want returned. All are said to have been taken from the same temple complex at Koh Ker. Neither Cleveland nor Denver would disclose the origins or collecting histories of the contested statues.

The Metropolitan Museum of Art has agreed to return two ancient Khmer statues to Cambodia after reviewing clear evidence that they were looted. Here’s Jason’s story in Friday’s LA Times:

The Metropolitan Museum of Art has agreed to return two ancient statues to Cambodia after receiving convincing evidence they had been looted and smuggled out of the country illegally.

The 10th century Khmer statues, known as the Kneeling Attendants, have flanked the entrance to the Met’s South East Asian galleries for years and are among the museum’s most prized objects from the region.

They were acquired in fragments between 1987 and 1992 as donations primarily from Douglas Latchford, a British collector based in Bangkok who is at the center of a federal investigation of antiquities looted from the ancient temple complex of Koh Ker.

Cambodian officials announced last June that they would seek the return of the statues. At the time, Met officials said they had no information to indicate the statues were stolen.

On Friday, the Met would not release details on what information led it to decide to return the statues, but noted recent press reports and information provided by UNESCO officials, who have been investigating looting in Cambodia.

“All I can say is that sufficient evidence came to light,” said museum spokesman Harold Holzer. “It was dispositive and more than satisfied the director.”

The returns suggest Cambodia has found substantial evidence to support its claim that several American museums possess looted antiquities that were illegally exported by Bangkok-based dealer Douglas Latchford. Latchford has denied the claim.

The Met’s returns will also have an impact on the on-going lawsuit in which the US government is seeking the return of a Khmer warrior statue at Sotheby’s. See here for our complete coverage of the case , including court documents that detail the government’s evidence.