The Getty’s Looted Amber: A Window into the Museum’s Deepening Dilemma

In Saturday’s Los Angeles Times, I have a story about Getty Museum’s efforts to find the true origins of its massive antiquities collection.

Here’s how the story starts:

In the wake of a scandal over its acquisition of looted antiquities, the J. Paul Getty Museum is trying to verify the ownership histories of 45,000 antiquities and publish the results in the museum’s online collections database.

The study, part of the museum’s efforts to be more transparent about the origins of ancient art in its collection, began last summer, said Getty spokesman Ron Hartwig.

“In this effort, and in all our work, when we identify objects that warrant further discussion and research, we conduct the necessary research to determine whether an item should be returned,” Hartwig said in a statement to The Times. 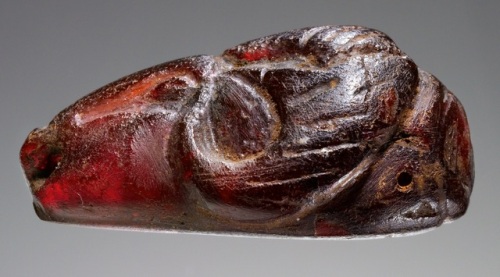 The review is likely to reveal that problems in the Getty’s collection go far deeper than the nearly 50 looted objects returned since 2007, according to Getty records and interviews with antiquity dealers and former museum officials.

Hundreds of objects still in the collection were acquired with false ownership histories aimed at disguising their origins in the illicit antiquities trade, records and interviews show.

The depth of its problem was underscored in November, when the Getty published a catalog of 56 carved ambers, objects that the ancient Greeks and Etruscans used in amulets for the magical properties they were believed to possess.

At first look, “Ancient Carved Ambers in the J. Paul Getty Museum” represents the museum at its finest — decades of scholarship published online in an illustrated catalog that engages the public in a rarely studied artifact of the ancient world.

But records — including internal Getty files — show that the ambers were almost certainly looted from tombs in northern Italy.

The relics passed through the smuggling network of Giacomo Medici, who has been convicted in Italy of trafficking in illegally excavated artifacts. Once in the United States, they were donated to the Getty as part of a tax fraud scheme that nearly brought the institution to its knees in the 1980s.

The catalog is silent on this history, which a Getty spokesman says the museum was not aware of at the time, but it does acknowledge the consequences. Because nothing is known of the context in which the ambers were found, little can be definitively concluded about their meaning to their ancient owners.

“Were they purchases, part of a dowry, heirlooms, or other kinds of gifts?” writes Faya Causey, author of the catalog. “Unfortunately, we can only speculate as to whether the ambers were actually possessions of the people with whom they were buried, how the objects were acquired, and in which cultic or other activity they played a part.”

The ambers capture the dilemma that the Getty faces today. Having largely abandoned the purchase of ancient art, it is using its unparalleled resources to restore meaning to objects whose history it had a hand in destroying.

You can read the full LA Times story here.

This is not the first time questions have been raised about the Getty’s study collection, the tens of thousands of artifacts in the museum’s collection deemed not worthy of display but held in storage for scholarly study.

In the 1990s, hundreds of pottery sherds and votive fragments in the collection were linked to a looted archaeological site in Francavilla Maritima. Under Marion True’s leadership, the Getty conducted an exhaustive scholarly study of the material, then returned it to Italy.

Last year, the Getty quietly returned 150 marble fragments in the collection (88.AA.140 – 88.AA.144) to Italy after evidence emerged that they joined objects found in the same looted tombs of Ascoli Satriano that produced  the Getty’s Griffins and statue of Apollo, which were returned to Italy in 2007. The objects and fragments were acquired in the 1980s from London dealer Robin Symes.

In his letter to Director General Luigi Malnati last January, Jim Cuno said, “The Getty acquired these objects as a gift in 1988, in the hope that they would be preserved and studied and eventually reconnected with other fragments of the same objects.  Happily, careful scholarship has led to that result.  Working with colleagues in Italy, Getty curators have determined that the fragments in our possession are very likely to match with vessels from Ascoli Satriano.  It is our hope that the fragments can be examined to ascertain their pertinence, and rejoined to these vessels.” Dr. Malnati invited [Getty antiquities curator] Claire Lyons to join a committee formed as a research collaboration to examine the pieces.

But the Getty’s problems are not confined to the study collection, as was demonstrated last week when the Getty announced it would return a terracotta head of Hades to Sicily. It will be reunited with the statue’s body, which was found at the archaeological site of Morgantina — the same source of the Getty’s looted statue of Aphrodite, which was returned in 2010.

These returns are a reminder of the Getty’s crooked collecting practices, but they also offer some reason for hope. Each return has contributed to important new insights about archaeological sites that were despoiled by looters. The process of joint investigation and return has helped re-create some of the lost context — something Lord Colin Renfrew once described as “Post-disjunctive forensic re-contextualisation.”

Expect to see more if it in the year ahead. As noted in Saturday’s story, a large part of the Getty’s study collection was acquired in bulk donations in the 1970s and 1980s via the looting and tax fraud scheme we describe in Chapter 2 of Chasing Aprhodite. Records show that much of it passed through the smuggling networks of Medici, Hecht, Symes and Becchina, suggesting it will likely end up back in Italy sooner or later.

The ambers are the latest tip to surface of a very large iceberg. As David Gill noted in November, “the scale of the problem for the Getty is massive.”