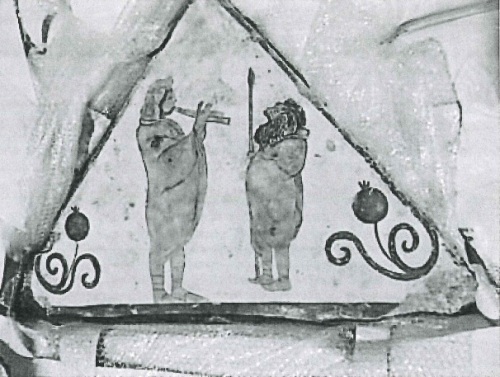 UPDATED with a statement from Andrew Baker below.

The legal foundation for the case was created by Steinhardt himself twenty years ago with his failed effort – fought all the way to the US Supreme Court – to block the seizure of a golden libation bowl that was illegally exported from Sicily.

The Steinhardt case, as it is known, affirmed that false statements on customs forms about an object’s value or country of origin could be a basis for forfeiture. The civil complaint against the fresco filed Nov 14th by Assistant US Attorney Karin Ornstein in New York’s Eastern District cites the same law on material false statements (Title 18 USC Sec 542) in justifying its seizure and forfeiture.

On April 19, 2011 the fresco was shipped to Steinhardt via FedEx from Kloten, Switzerland, according to the complaint. On customs forms, the object was described as being for “personal use” — as opposed to “for sale” — and it’s country of origin was declared to be Macedonia, the complaint states.

The fresco never made it to Steinhardt. It was detained at Newark Liberty Airport by Customs and Border Protection agents, who requested a documented ownership history for the fresco. An employee of Mat Securitas, a Swiss shipping and security service, provided an Oct. 2011 affidavit of provenance signed by the shipper of record, Andrew Baker of Vaduz, Lichtenstein.

Baker’s affidavit stated the fresco had originated in Macedonia and been acquired in 1959 by Lens Tschanned, who had kept it in his private residence ever since. It was being shipped to a potential buyer and had an estimated sale price of $12,000, the affidavit said.

Experts and Italian investigators came to a different conclusion, court records show. The fresco appears to have been looted from the archaeological site of Paestum, south of Naples. Paestum is well known for its painted tombs and was designated as a UNESCO World Heritage Site in 1998.

In 1969, Italian archaeologist Mario Napoli began excavations of the Andriuolo necropolis. Among the finds was Tomb 53, which had a triangular pediment nearly identical to the fragment sent to Steinhardt. Today it is the National Archaeological Museum of Paestum. With identical dimensions and an image that precisely mirrors the Steinhardt fragment, experts believe the two stood at opposite sides of Tomb 53, the complaint states.

Fresco from Tomb 53, now in the National Archaeological Museum of Paestum

The complaint alleges that the story of the “old Swiss collection” and the customs declaration citing a Macedonian origin are false, noting that Tomb 53 was first excavated a decade after 1959. In short, the fresco fragment was stolen.

When Baker was presented with the evidence, he cooperated with investigators and agreed to forfeit the fresco fragment, according to a stipulation filed with the case. He denied knowledge that the fragment had been stolen and said he relied upon the representations of an unnamed person who donated it to him. The fresco is now in federal custody awaiting its return to Italy.

The case involves some familiar names:

Andrew Baker is a UK solicitor based in London, Turks and Caicos and, since 1992, Lichtenstein. He specializes in tax minimization and has been accused of fraud and money laundering, court records show. One account of the case says, “After analyzing Baker’s offshore structure one expert issued a damning report referring to Baker’s structure as ‘sham’ that is clearly reminiscent of a classic money laundering scheme, indeed rustic at that.'” We’ve asked Baker for a comment and will post it if we receive one.

The piece in question was part of a long-standing family collection held by a Liechtenstein establishment of which I am the director. It was believed to have originated from Macedonia but sufficient evidence was eventually produced to me by the US authorities to persuade me that its more probable origin was Italy. As soon as I received the evidence, I was more than happy to give the piece up for return to Italy which had laid a claim to it. To answer your question, I do not regularly trade in ancient art.

Regarding the allegations in the lawsuit mentioned above, Bake called them bogus, adding:

[Joseph] Kay and [Emanuel] Zeltser did indeed start a civil law suit in Miami against me and others but they have lost hands down at every instance so far. My understanding is that we now await the outcome of their final appeal.

Baker’s attorney on the fresco case is none other than Harold Grunfeld, who is representing collector Jonathan Rosen in the return of 10,000 cuneiform tablets to Iraq that we wrote about earlier this month.

Michael Steinhardt is a pioneering hedge fund manager and prominent antiquities collector whose net worth is estimated at more than $1 billion. Both he and his wife play a prominent role in the New York art world.

Michael sits on the American advisory board of Christies and endowed the Director’s position of New York University‘s Institute of Fine Arts, where his wife Judy is the chairwoman. In addition to antiquities, Steinhardt is a major collector of Judaica. On his collection’s website he gives special thanks to Robert Hecht, one of the most prominent dealers in looted antiquities since World War II.

He has been a vocal defender of Shelby White, another prominent New York antiquities collector and controversial donor to NYU. In 2007, Steinhardt told The New York Sun, a newspaper he owns, that White had been unfairly singled out by Greek and Italian authorities who sought the return of looted antiquities in her private collection. “She and her husband, Leon [Levy], have been generous to a fault to all sorts of institutions” Steinhardt said. “Shelby has stood alone, and was not as strongly defended as she should have been by those very institutions to whom she had been a too-generous donor.”

The success Italy, Greece and others have had with restitution claims against American collectors and museums “reflects the weak and inept policy of the American government,” Steinhardt told the Sun. “It seems to me that [the source countries] go after that place whose government is weakest and doesn’t have the courage to stand up for its citizens. The U.S. State Department and the U.S. cultural policy professionals have really, I think, done a great disservice to the cultural institutions in this country.”

The fresco case suggests that Steinhardt remains an active collector of antiquities with unclear ownership histories – even after his lengthy legal battle in the 1990s. In the past he has loaned prominent works to the Met, but recently told Lee Rosenbaum that he would not donate the objects to the museum because he was “less than overjoyed” with how the museum handled antiquities controversies.

It remains an open question if an American institution would accept Steinhardt’s extensive antiquities collection should he choose to donate it some day.

The Rosen Connection: Cornell Will Return 10,000 Cuneiform Tablets to Iraq 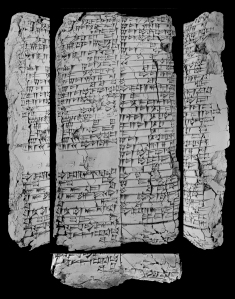 On the front page of Sunday’s Los Angeles Times, Jason has the scoop on Cornell University’s decision to return 10,000 cuneiform tablets of unclear provenance to Iraq.

The tablets were donated and lent to Cornell by New York attorney Jonathan Rosen, one of the world’s leading collectors of Near Eastern antiquities. Rosen is a prominent donor to the Metropolitan Museum of Art and Yale University, among others. For years he was also the business partner of Robert Hecht, a leading dealer of looted antiquities to American museums. Their Manhattan gallery Atlantis Antiquities was the source of several looted objects, including some that the Getty Museum has returned to Italy.

The source and ownership history of the Cornell tablets is unclear, as is the cause for their return. Neither Rosen nor the university will say where they were obtained, what their ownership history is or why they are being returned. Iraqi authorities requested their return in 2012, and likewise will not comment on what prompted the request. A press conference announcing the return is expected in the coming weeks, once a formal agreement has been signed. The deal will likely include a collaboration agreement between Iraq and Cornell.

Cornell has been criticized for accepting the Rosen Collection by scholars who suspect the tablets were looted from Iraq in the years after the 1991 Gulf War. Federal investigators suspected the same thing, records show.

The source of the Garsana tablets was the subject of a 2001 investigation by the Department of Homeland Security, according to records obtained by Harvard researcher Benjamin Studevent-Hickman under the Freedom of Information Act. Buying and possessing antiquities illegally removed from countries such as Iraq, which claim them as government property, can be a violation of U.S. law.

Investigators also looked into potential violations of the Trading With the Enemy Act, which at the time barred doing business with Iraq, and tax fraud, the records said. The 1,679 tablets were valued at less than $50,000 when they were imported, but the donor received a $900,000 tax deduction when they were given to Cornell in 2000, the records said.

Ultimately, there were no findings of wrongdoing because investigators could not determine precisely when or where the objects were found, the records show.

Harold Grunfeld, attorney for Jonathan Rosen, said all of the tablets “were legally acquired” and that the federal investigation found “no evidence of wrongdoing.” He said the tablets at issue were donated by Rosen’s late mother, Miriam.

“It has always been the Rosen family’s intent that these tablets reside permanently in a public institution for scholarly research and for the benefit of the public as a vast informational tool in explaining life in the ancient world,” Grunfeld said.

The 1,600 tablets referred to in the records include the Garsana archive, a

… private archive of a 21st century BC Sumerian princess in the city of Garsana that has made scholars rethink the role of women in the ancient kingdom of Ur. The administrative records show Simat-Ishtaran ruled the estate after her husband died.

During her reign, women attained remarkably high status. They supervised men, received salaries equal to their male counterparts’ and worked in construction, the clay tablets reveal.

“It’s our first real archival discovery of an institution run by a woman,” said David Owen, the Cornell researcher who has led the study of the tablets. Because scholars do not know precisely where the tablets were found, however, the site of ancient Garsana cannot be excavated for further information.

Other tablets provide detailed administrative records of ancient life, including the procedures for temple rituals, the resettlement of refugees and the output of agricultural lands.

Below are copies of the investigative records related to the donation of the Garsana archive. They were obtained under the Freedom of Information Act by Benjamin Studevent-Hickman, a Harvard scholar who has a forthcoming book on a related set of tablets. The donor name has been redacted but Grunfeld confirmed the document refers to a donation by Miriam Rosen.

We’ll be posting more about this case and related ones in the coming days. Stay tuned!