Among the dozens of objects that the government of Turkey is asking American museums to return are 40 Byzantine relics at Harvard University’s Dumbarton Oaks Museum.

(We’ve previously reported on Turkey’s requests in the LA Times and detailed the objects being sought from the Met, the Getty, and the Cleveland.) 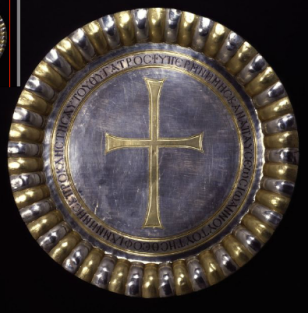 The silver and gold liturgical objects known as the Sion Treasure consist of plates, candlesticks, crosses and plaques. Some 40 pieces of the treasure are at Dumbarton Oaks, while another 10 or so are at the Antalya Museum in Turkey, with a few more said to be in private collections.

There does not appear to be much doubt that the treasure was looted and smuggled out of Turkey in 1963 — decades after the nation’s patrimony law made such acts illegal. Dumbarton Oaks’ own publication of the Sion Treasure suggests as much repeatedly. 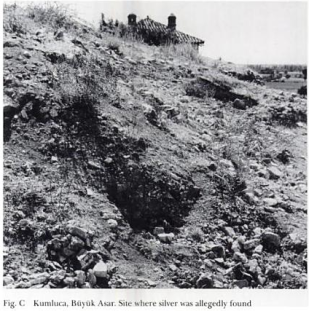 In 1986, Dumbarton Oaks organized a symposium about the treasure at the Walters Art Museum in Baltimore, which resulted in a 1992 book, “Ecclesiastical silver plate in 6th Century Byzantium,” edited by the museum’s Byzantium curator Susan A. Boyd. That publication includes this photograph of the looter’s hole where the treasure is believed to have been found.

The treasure’s precise findspot is later detailed at length: “Late in the summer of 1963, the Sion Treasure was found in the field called Buyuk Asar (big ruin) north of the hamlet Haciveliler (2km west of Kumluca, a modern town in southeastern Lycia,)” wrote German Byzantinist Hansgerd Hellenkemper. A marking on a nearby wall identified it as the ancient Lycian polis of Korydalla. The treasure was found some 30 meters from the ruins of an early Byzantine church, Hellenkemper added, suggesting it may have been buried by church leaders in the 7th Century to hide it from invading Arabs. She goes on to note that illegal excavations have made it difficult to know more about such treasures. “In the Eastern Mediterranean, a large number of Early Byzantine church treasures have been found, but an exact of nearly exact findspot is known for very few of them.” 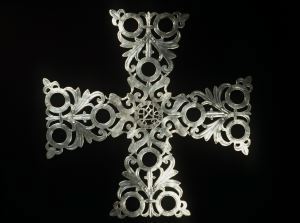 Dumbarton Oaks’ acquisition history says the treasure was purchased in 1963 in Switzerland from the antiquities dealer George Zakos by Mrs. Robert Woods Bliss, a private collector who donated it to the museum the same year. Zakos has been repeatedly tied to the illicit antiquities trade — among other things as a major supplier to Robert Hecht and the source of the Metropolitan Museum’s looted Lydian Hoard, which was returned to Turkey in 1993 after a bitter six-year legal battle.

Turkey has been seeking to reunite the Dumbarton Oaks material with the rest of the Sion Treasure for decades. Nizeh Firatli of the Istanbul Archaeological Museum first noted the missing treasure at a 1964 meeting in Athens, and soon after Turkey first requested that Dumbarton Oaks return the treasure. Several subsequent requests have been sent over the ensuing years, and Turkey’s request was recently revived. 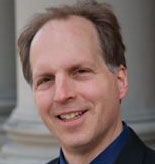 Dumbarton Oaks did not respond to repeated requests for comments on Turkey’s request — a curious position for an institution that serves as a research library. We eventually contacted Harvard University’s press office, which released the following statement on behalf of director Jan M. Ziolkowski: “Dumbarton Oaks has made the Sion Treasure available for exhibition, research and study for nearly a half-century. We are confident that we have proper title to these antiquities and, while representatives from Turkey have inquired about them on occasion over the years, they haven’t responded to requests for any documentation that might raise questions about the provenance of this important part of the collection.”

We asked both Ziolkowski and Harvard for additional information about why they believe the museum has proper legal title to the treasure. Given the suspect source of the treasure and Dumbarton Oaks’ own publication of details of its looting in 1963, what further “documentation” is Harvard waiting for? So far, our follow-up questions have been met with silence.