The Getty fights to keep its bronze athlete 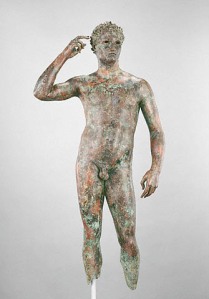 A week after sending its statue of Aphrodite back to Italy, the Getty is fighting to keep another ancient masterpiece: its priceless bronze statue of an athlete, whose 1964 discovery by Italian fisherman is featured in the opening chapter of Chasing Aphrodite.

“An Italian government official came to Los Angeles last week to propose a settlement to thelong-running dispute with the J. Paul Getty Museum over one of its most important ancient masterpieces, a bronze statue of a victorious athlete known as the ‘Getty Bronze.’

Gian Mario Spacca, president of the Italian region of Marche where the statue was hauled ashore by fishermen in 1964, met with Getty officials Friday to discuss a deal in which the statue would be shared as part of a broader exchange of art.

The talks come as an Italian court is expected to issue a verdict on the Getty’s appeal of a February 2010 ruling that the statue was illegally removed from the country four decades ago and should be returned.”

You can find the full story here.

The backstory on the bronze is here.

This is what the statue looked like soon after it was hauled from the Adriatic sea by Italian fishermen.

This entry was posted in News. Bookmark the permalink.

One response to “The Getty fights to keep its bronze athlete”