Loot at the Dallas Museum of Art? Museum Responds to Almagia Investigation

The Dallas Museum of Art contacted Italian authorities this month seeking information about three objects the museum acquired from antiquities dealer Edoardo Almagia, who is currently under investigation for trafficking in looted antiquities.

Almagia has been under investigation since at least 2006, when US Customs agents raided his New York apartment, and was the subject of a New York Times story in 2010 that revealed he and Princeton curator Michael Padgett were the target of an Italian investigation into the illicit antiquities trade.

Dallas’  inquiry came last month — two weeks after our initial inquiry about the objects and a week after Italy’s Carabinieri art squad held a press conference announcing that some 200 objects and fragments tied to Almagia had been returned by the Metropolitan Museum of Art and the Princeton University Art Museum. (See our earlier post here.)

A museum spokeswoman said Italian authorities have not (yet) made a request for the return of the objects. “The press conference in Rome on January 20, 2012 prompted a review of acquisitions made by the DMA that were connected with Edoardo Almagia,” said museum spokeswoman Jill Bernstein. “Our director Maxwell Anderson emailed [Carabinieri] Comandante Pasquale Muggeo and Avv. Maurizio Fiorilli on January 27 to alert them to the presence of three works sold to us in 1998 by Almagia, and soliciting any information they might have about these works.”

The museum has since listed the objects on the AAMD’s object registry, as noted by David Gill at Looting Matters. Here are the Almagia objects, along with their collecting histories, which were provided by the DMA:

Two Etruscan funerary shields from the 6th century BC depicting the man-bull deity Acheloos. The museum purchased the shields from Almagia in 1998. They were “reputedly in a European collection” prior to sale, but the museum has no additional information about that collection.

The DMA’s website notes that “comparable examples have been found stacked up in a tomb near Tarquinia,” a UNESCO World Heritage site whose Etruscan necropolis has been devastated by looting.

Volute krater by the Underworld Painter. This Apulian vase from the 4th century BC represents the twelfth labor of Hercules, in which he saved the Golden Apples of the Hesperides from the giant Ajax. 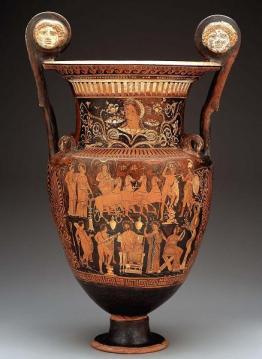 The DMA bought the object in 1998 from Almagia, who claimed it came from an “unnamed English collection.”

Such vases from the South Italian region of Pulia have been the subject of widespread looting, as documented in the groundbreaking study by Boston University archaeologist Ricardo Elia’s “Analysis of the looting, selling, and collecting of Apulian red-figure vases: a quantitative approach.” (In Trade in illicit antiquities: the destruction of the world’s archaeological heritage, edited by N. Brodie, J. Doole, and C. Renfrew, pp. 145-53. Cambridge: McDonald Institute, 2001)

We asked the DMA about several other acquisitions of ancient art purchased in recent years, when most museums were tightening their standards in the wake of revelations about their role in the illicit antiquities trade. Several of the DMA’s acquisitions were purchased from dealers or auction houses who have been tied to the alleged sale of looted or stolen art in the past. Most of the objects have only vague ownership histories. 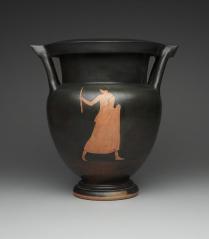 This red-figured column krater was purchased in 2008 from Jerry Eisenberg of Royal-Athena Galleries in New York City. It was “reputedly in an English collection” before that. As we reported here, Eisenberg recently returned a bronze statue to Italy that had been stolen from an Italian museum in 1962. UPDATE: Eisenberg noted via email that the vase was also sold at Bonham’s London in October 1999.

The museum has purchased several objects from Robert Haber of Haber and Associates, including this 4th Century Greek funerary wreath. Haber was implicated in the Steinhardt case involving a golden phiale illegally exported from Italy. The wreath’s ownership history lists the Moretti collection from Lugano, Switzerland and George Zacos — the same dealer tied to the Met’s acquisition of the Lydian Hoarde from Turkey.

We’ve posted the list of all 15 DMA objects we inquired about here. These are just a random sampling of recent acquisitions made by the museum.

Maxwell Anderson, the DMA’s new director, has been an outspoken advocate for reform in his past positions, and it will be interesting to watch how he handles these issues at his new post in Dallas. For starters, we hope that Anderson encourages Dallas to be more transparent by posting the provenance information for its considerable collection online. Dallas and other museums should also be more proactive in their investigation of the objects purchased from dealers who have been tied to the illicit trade.

UPDATE: David Gill at Looting Matters has identified a vase at the Tampa Museum of Art acquired from Edoardo Almagia. It appears similar to a vase described in an article by Princeton curator Michael Padgett in Tampa Magazine.

4 responses to “Loot at the Dallas Museum of Art? Museum Responds to Almagia Investigation”