We’ve heard back from more museums about objects they acquired from Edoardo Almagia, the Italian dealer at the center of an investigation into the illicit antiquities trade.

As we’ve reported previously, the Met and Princeton University museums have recently returned more than 200 Almagia objects and fragments to Italy, some of which may be used as evidence in the criminal trial of Almagia and Princeton antiquities curator Michael Padgett. Italian investigators have also traced the dealer’s objects to the Dallas Museum of Art, and we found one at the Getty.

We can now provide details about Almagia objects at three more American museums.

The Boston Museum of Fine Art has ten objects tied to Almagia, nine of which were impasto vases acquired in 1995 as donations from Jonathan Kagan, a prominent investment manager. Prior to Almagia, the objects were “said to have been purchased in Basel.” An old Swiss collection there, no doubt. A decade before donating the Almagia objects to the Met, Kagan was reportedly behind the sale of the Elmali Treasure, a vast hoard of ancient coins allegedly looted from Turkey.

The tenth Almagia object at the Boston MFA is a lovely Roman bust of an old man made of Carraran marble from northwest Italy. The museum purchased the bust directly from Almagia in 1991. It has no documented ownership history.

Details of all the Almagia objects in Boston can be found in the MFA’s release here.

In a statement, museum spokeswoman Amelia Kantrovitz said, “Since 2000, the provenance of these objects–like virtually all objects in the Museum’s collection–has been available at mfa.org. There have been no recent discussions with Italy or Mr. Almagià about these works. The MFA’s relationship with Italy over the last 5 years has led to important loans, several of which are on view in the current exhibition ‘Aphrodite and the Gods of Love.'”

None of the 13 objects returned by Boston in 2006 came from Almagia, Kantrovitz added, though the bust shown above was among the objects discussed during negotiations.

The San Antonio Museum of Art purchased two Greek vases from Almagia in the 1980s. The first (above) is a red-figure Oinoche depicting Dionysos and a satyr attributed to the Florence Painter.

The second vase (right) is a red-figure Attic plate depicting the head of a man. As for its provenance, the museum could only say it is “said to be from Barbarano Romano,” an Etruscan necropolis in Viterbo, Italy. (You can view a panoramic image of the tombs here.)

The museum also has 54 vase fragments — also said to be from Barbarano Romano — that were purchased from Almagia in 1986 by a local attorney, Gilbert Denman Jr., who donated them to SAMA the same year. 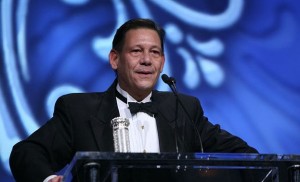 Carlos Picon, curator of antiquities at the Met

None of the antiquities have a documented ownership history. All were acquired under then-curator Carlos Picon, the current antiquities curator at the Metropolitan Museum of Art. As David Gill has noted, Picon also knew Giacomo Medici and has described being touched by the generosity of the convicted antiquities trafficker. It will be interesting to know more about the relationship between Picon and Almagia as the Italian investigation unfolds.

SAMA director Katie Luber said in a statement that the museum reached out to Italian authorities about the Almagia objects on February 17th, two weeks after first being contacted by us. It has not yet heard back.

The museum Indiana University acquired two objects from Almagia in 1986. Mark Land, a museum spokesman, said in an email, “IU Art Museum has not been contacted by Italian authorities regarding Mr. Almagia nor has the museum been asked to return any objects associated with Mr. Almagia. The museum has had no discussions with Mr. Almagia about the objects in question.”

Land did not have details about the objects’ ownership histories but he did provide images: 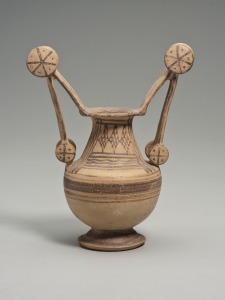 Meanwhile, Princeton University is refusing to respond to questions about its own ties to Almagia, perhaps because the museum’s antiquities curator Michael Padgett remains the subject of a criminal investigation for his ties to the dealer. Since the University released a vague statement on January 25th, we have sent several follow-up requests for additional information. University spokesman Martin Mbugua has failed to respond to any of them — odd behavior for an educational institution.

Below are the questions I send to Martin on January 27th. Perhaps some of our readers will have better luck than I getting answers. Should you care to try, his email is mmbugua@Princeton.edu

Thank you for the link, Martin.

Unfortunately the release was not very helpful. It did not state the reason for the returns and did not answer my questions about the objects. I shall try again:

Can you please provide images and the ownership history for each of the returned objects?

Also, please provide a copy of the internal investigation that apparently led to the decision.

Can you clarify the release’s statement that Princeton had good title to the objects it returned? If Princeton had title, that would indicate the objects had not been illegally exported from their country of origin. If that is the case, why would the university return them?

Finally, are there additional objects in Princeton’s collection that were donated or purchased from Almagia that have not been returned? If so, please provide a list of them with information about their ownership histories.

You referred me to investigators for an update on the Padgett investigation. I have contacted them. Given that Padgett is an employee of the university, I have a few questions that only the university can answer:

— is the University paying for Dr. Padgett’s defense?

— The Met indicated it returned objects so they could be used as evidence in a possible criminal trial. Were the Princeton returns sent back for the same purpose?

— Has the University investigated the allegations against Dr. Padgett? If so, what conclusion was reached?

I understand that on-going investigations are sensitive matters. My experience is that transparency in these matters is the best way to demonstrate good faith to the public.