UPDATE 6/15/15: The Asian Civilizations Museum has agreed to return its looted sculture of Uma, according to Indian press reports. Twenty eight additional Kapoor objects at the museum remain under review.

UPDATE 3/20/15: The Asian Civilizations Museum has filed a lawsuit against Subhash Kapoor in New York City seeking repayment of $1.4 million it paid him for antiquities with falsified ownership histories. As noted earlier when Australia’s NGA took a similar step, such lawsuits are unlikely to prevail given Kapoor’s on-going criminal trial in India.

UPDATE: In response to this report, the Asian Civilizations Museum confirmed our accounting and released information on a few objects we missed, including six additional paintings purchased for $100,000 and a 10th century stone Nandi purchased for $55,000. That brings the total paid to dealer Subhash Kapoor to more than $1.3 million. The museum has yet to release any information on the provenance for the ancient objects.

Singapore’s Asian Civilizations Museum bought more than $1 million of art from disgraced Manhattan antiquities dealer Subhash Kapoor, according to business records from Kapoor’s Art of the Past gallery.

Invoices that Kapoor sent to the ACM between 1997 and 2010 detail more than two dozen objects he sold, including nine antiquities of unclear provenance. (Kapoor also sold Indian manuscripts and paintings that to date have not be the subject of law enforcement investigations. Our complete Kapoor coverage here.) Most of the invoices were directed to the ACM’s former senior curator for South Asia, Dr. Gauri Krishnan. Krishnan is now director of the Indian Heritage Centre at Singapore’s National Heritage Board. The ACM did not respond to a request for comment.

Last December we reported that the ACM’s sculpture of Uma Parameshvari was stolen from the Sivan Temple in India’s Ariyalur District in 2005 or 2006, according to the court records filed with the guilty plea of Kapoor’s gallery manager Aaron Freedman.

In January, the ACM acknowledged it had purchased a total of 30 objects from Kapoor, who currently stands trial in India for trafficking 18 idols stolen at his request from local temples. The ACM did not name the objects, detail their provenance or disclose the price the museum had paid for them. 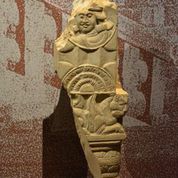 In October 1997, Kapoor billed the ACM $22,500 for a 3rd Century limestone fragment from Amaravati, South India. “Examples from the Amaravait stuppa are extremely rare to find,” Kapoor wrote in text accompanying the sale. “This particular piece does not come from the stuppa proper, but from the outer rail copings that surrounded the stuppa. It is an exceptional example in both its size and in its illustrative qualities…The iconography of this fragment makes this a most interesting piece from the Amaravati area.”

Later that same month, Kapoor sold the ACM a copper 11th Century Standing Buddha from Nagapattinam, Tamil Nadu for $15,000. “Nagapattinam was an important center for Buddhism in South India,” he noted in the text. “Material from this area is extremely rare to find, and especially in such fine condition. The Los Angeles County Museum of Art has an example which is slightly larger, but remains in a much inferior condition (vol.2 fig.140b). This example, though, is extremely crisp and well articulated.” 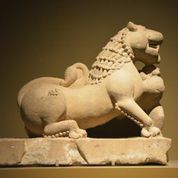 That same month, Kapoor billed the ACM $9,500 for Hindoo Costumes, an album of 14 paintings from South India. Kapoor said the previous owner of the album was Sofia Anna Woolfe. In March 1999, Kapoor sold the ACM two 19th century watercolors from Tanjore for $6,000. 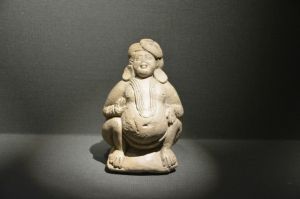 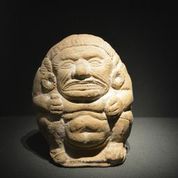 An Art of the Past invoice dated April 2002 shows the ACM bought three ancient rattles from Kapoor for $10,000. The rattles (above) depict a seated man with bare belly, a boy seated with ball, and a seated man.

In July 2006, Kapoor provided ACM with a letter of provenance for a late 18th century altar from Goa with the Virgin Mary and Christ Child. The letter claims the altar had belonged to the parents of Selina Mohamed, Kapoor’s girlfriend. Mohamed claimed her parents acquired the altar in the 1960s and gifted it to her in 1992. (For reasons that are not clear, Kapoor did not send an invoice for the altar until February 2009, when he billed the ACM $135,000.)

Mohamed was indicted by US authorities in December 2013 on four counts of possession of stolen property and one count of conspiracy. Court records allege she fabricated false ownership histories for dozens of objects sold by Kapoor.

In February 2007, Kapoor sold the ACM the 11th century bronze Chola sculpture of Uma Parameshvari mentioned above. The price, after a $100,000 “discount,” was $650,000. The Uma had appeared in Art of the Past’s 2006 catalog. The ACM’s former curator Gauri Parimoo Krishnan has described the sculpture as one of the museum’s most prized artifacts, and it is featured prominently in museum promotional materials.

In a separate invoice that month, Kapoor specified the price ACM paid for ten additional objects:

Also in February 2007, Kapoor provided the ACM with a guarantee for the authenticity and provenance “of all artwork sold.” “If in the future the verity of either their provenance or authenticity is legally questioned and found to be incorrect, I nearby promise to reimburse the Asian Civilization Museum for the cost paid…” In April 2007, Kapoor billed the ACM $12,381 for the customs duties for the shipment of nine paintings an one manuscript, most likely the ones listed above.

Given the ACM’s extensive dealings with Kapoor, the Singapore museum should immediately release the provenance documents for all the antiquities it acquired from the dealer and proactively reach out to Indian and American investigators.

Our gratitude to Vijay Kumar for supplying several images of the Kapoor objects on display in the ACM. Readers can follow developments in the Kapoor case at Kumar’s website Poetry in Stone.