This week, a series of five federal raids during New York’s Asia week led to the seizure of at least eight looted antiquities and the arrest of at least one dealer. This is the first of several posts that will discuss the alleged smuggling networks disrupted by those raids.

The Asia Week raids started on Friday at Christie’s, where federal agents seized two sculptures valued at $450,000 being offered as part of the private collection of London doctor Avijit Lahiri and his wife Bratatihis.

Court records reveal a link between the objects and a key supplier of Subhash Kapoor, the American antiquities dealer now on trial in India for his role in a global trafficking network.

Taken together, the Asia Week raids show that the 2012 seizure of Kapoor’s business records (as well as more than $100 million in looted antiquities he had in storage) have allowed investigators to identify looted antiquities being offered for sale on the American art market, much as the Medici, Becchina and Symes archives have done in recent years.

They also show that aggressive law enforcement investigations can have a meaningful effect disrupting those smuggling networks. 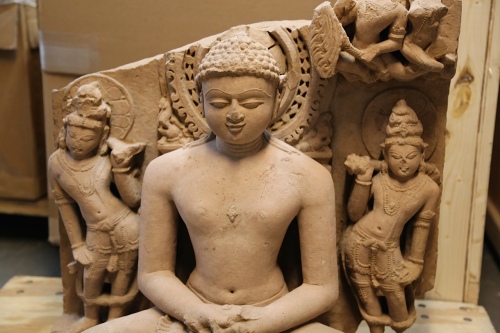 It is not clear where Lahiri acquired the 10th century stele of Rishabhanata (shown above.) Based on its style, the piece was likely found in Rajasthan or Madhya Pradesh, India. Christie’s stated it had been acquired in London by 1999. In 2006, Lahiri put it on consignment with the  London dealers Oliver Forge and Brendan Lynch Ltd. Forge and Lynch stated it had been in London since 1989.

Lynch has had prior run-ins with the illicit antiquities trade in India. Court records filed this week quote a confidential informant telling authorities that Lynch “traveled to India roughly twice a year in the 1980’s while working for London Sotheby’s as the head of their Indian and Islamic Department in order to meet with Vaman Ghiya (an arrested antiquities dealer in India) to select recently looted artifacts for Sotheby’s auction.” Ghiya is a notorious convicted Indian antiquities smuggler who has been described as “the Indian Medici.” In 2007, he was profiled in the New Yorker story The Idol Thief. Lynch, who admitted hiding from Indian police in Ghiya’s house, left Sotheby’s after his dealings with Ghiya were exposed, but has continued to deal in Indian and other art since the 1990s.

In a statement, Forge and Lynch said they never sold the Rishabhanata: “In 2006, the Sandstone Stele of Rishabhanata was consigned to Oliver Forge and Brendan Lynch Ltd by Dr. Lahiri, a London-based collector of Indian and Southeast Asian works of art. The sculpture was not sold and was returned to Dr. Lahiri. The sculpture was exhibited on asianart.com while on consignment with the firm. Prior to the consignment, Dr. Lahiri had informed Messrs. Forge and Lynch that the sculpture was purchased by him in London in 1989.The firm has never bought from or sold an object to Subash Kapoor.” We have asked Lynch for a comment on the Ghiya allegations and will post it when we receive one.

Kapoor’s files revealed the object’s earlier history: a photo (below) of the Rishabhanata was found in a folder labeled “Shantoo,” the nick name for an alleged Indian smuggler named Ranjeet Kanwat, court records state. The image showed the sculpture sitting on a bed of straw as it looked soon after being looted. 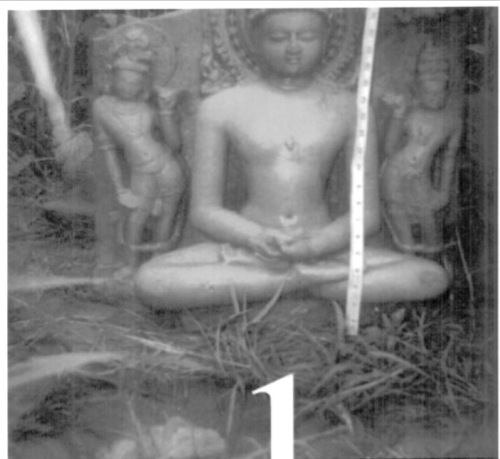 The first to match the Shantoo image to the Lahiri stele was Vijay Kumar, an Indian art enthusiast and blogger in Singapore who has been quietly helping authorities track down Kapoor’s looted art.

Two years ago Kumar recognized the Rishabhanata offered by Lynch and Forge as the same one that Shantoo had offered to Kapoor. The problem: nobody knew where the piece was at the time.

When Kumar saw the Rishabhanata appear in the Christie’s catalog for its Asia Week sale, he alerted investigators, who organized the seizure.

Smugglers and dealers “are destroying destroying context, reducing our Gods to showcase curios and funding anti social elements,” Kumar said Friday when asked about his role. Countries of origin “must realise the value of what the USA is doing and support this with arrests and prosecutions.”

Revanta and his Entourage

The second object seized from Christie’s, an 8th century panel showing Revanta and his Entourage (above), also appears to have originated with Shantoo, court records show.

Christie’s offered the piece, Lot 62, with a $300,000 estimate at its Asia Week sale, stating that it had been sold by Spink and Son auction house in London by 1999. Spink and Son has become a notorious name in recent years as the source of several looted objects, including the looted Khmer statue seized from Sotheby’s and returned to Cambodia in 2013. As Neil Brodie recently observed, Christie’s holds the original records of Spink’s Asian sales but has not released them publicly.

Kapoor’s files show the same Revanta relief was offered to him by “Shantoo” some time in the 1990s. The offer included this picture of the piece in the mud and surrounded by straw, suggesting it had recently been looted.

Notably, several pieces missing from the relief in the Shantoo image are reunited with the sculpture by the time it is offered at Christie’s. In court records, authorities suggest that these “orphan” fragments may have been held back by looters to extract a higher price or to be sold separately.

On March 15, the Lahiri sale continued despite the embarrassing seizures. The auction netted nearly $2.4 million with the buyer’s premium.

In a statement Christie’s said it had no knowledge of the illicit origins of the sculptures. “Christie’s devotes considerable resources to investigating the provenance of all objects we offer for sale,” the statement read. “This is one of the difficulties the art market faces in vetting antiquities, which is why Christie’s very much values building strong relationships with and between countries of origin, law enforcement, archeologists, and the collecting community.”