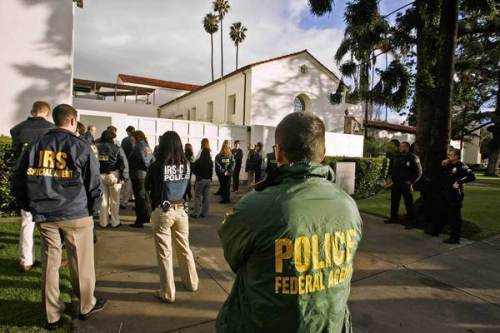 UPDATE: My article on the case has been posted at The Art Newspaper here.

UPDATE: The Markells will return 337 antiquities to Thailand as part of their sentencing agreement. Details on the seized objects are linked below.

UPDATE: The Mingei International Museum in San Diego has returned 68 looted Ban Chiang objects to Thailand. See below for details.

Antiquities dealers Jonathan and Cari Markell were sentenced by a federal judge on Monday for their roles in the smuggling and tax fraud scheme that triggered sweeping federal raids on California museums in 2008.

Jonathan and Cari Markell with the Dalai Lama

On Jan 24th, 2008, some 500 federal agents served warrants on 13 locations that received objects tied to the smuggling network, including the Los Angeles County Museum of Art, Pasadena’s Pacific Asia Museum, the Bowers Museum of Cultural Art in Santa Ana, the Mingei International Museum in San Diego and the home of Barry MacLean, a private collector in Chicago.

The investigation sent shockwaves through the art world, suggesting that even amid an international scandal over the Getty Museum’s role in looting, other local museums had continued to do business with the black market. Some critics later called the raids over-zealous, noting that despite that the massive investigation, the government had failed to win jail time in the long-delayed criminal trials that followed.

That changed on Monday, when Jonathan Markell, 70, was sentenced to 18 months in prison followed by a year of supervised release for making false declarations while importing antiquities from South East Asia. Markell and his wife Cari, 68, were also sentenced to probation for their role in a related tax evasion scheme in which looted antiquities were donated to local museums in exchange for inflated tax write-offs.

The couple was also ordered to pay $25,000 to cover the costs of repatriating hundreds of antiquities seized by federal agents in raids on their Los Angeles home and gallery, Silk Roads Gallery.

Dr. Joyce White, a University of Pennsylvania expert on Ban Chiang culture who served as an expert for prosecutors on the case, said in a declaration that the 10,000 looted artifacts seized during the federal investigation represented as much as 175 times more material than what was recovered during scientific excavations of the site in the 1970s. The Markells were among the “key players” who developed a U.S. market for artifacts from the site, a demand that fueled rampant looting there.

In a Dec. 8 letter to federal judge Dean Pregerson, Jonathan Markell expressed remorse for his actions and pled for leniency in his wife’s sentencing. “My remorse over my dishonest actions will continue for the rest of my life, as my actions have put my family in jeopardy emotionally, socially, psychologically and financially for the past eight years,” wrote Markell, who graduated with an art history degree from UC Berkeley and got an MBA from Columbia University in arts administration. “I also owe an apology to the people whose heritage is the Ban Chiang civilization,” the world heritage site in Thailand where much of the material he sold was looted.

Operation Antiquity, the federal investigation of the Markells smuggling network, was one of the most aggressive government efforts to disrupt the illicit antiquities trade in history. For five years, Todd Swain, a federal agent with the National Park Service, operated undercover as an art collector to gather evidence against the Markells and their principal supplier, alleged smuggler Robert Olson. After several delays, Olson’s criminal trial is now scheduled for May 2016.

Roxanna Brown, a respected American expert in Southeast Asian ceramics, was caught up in the investigation and died in federal custody in 2008 after suffering a medical emergency after her arrest in Seattle. Court records show Brown provide falsified appraisals for the Markells and worked closely with Olsen to bring looted material into the United States. The federal government eventually settled a lawsuit brought by her family for $880,000.

In 2014, the Bowers Museum of Art agreed to return 542 ancient vases, bowls and other artifacts to Thailand. Other museums have waited for the outcome of the Markell’s criminal case before deciding what to do with objects from the couple and its network of donors.

UPDATE: The Mingei International Museum in San Diego has returned 68 looted Ban Chiang objects to Thailand, according to a federal law enforcement official. The objects were among those targeted during federal raids on the museum in 2008. A museum spokeswoman declined to comment on the returns.

UPDATE: Jerry Coughlan, an attorney who represents the Mingei, confirmed the returns on Thursday, saying all 68 objects had been donated by the Markells. After the museum raids in 2008, the Mingei had offered to return the objects to Thailand and held them in storage while awaiting instructions from federal officials.

“Essentially, the government called and said it would not press charges against the Mingei but asked us to return items to Thailand,” Coughran said. “They were shipped in the last day or two and should be arriving soon.”

It is exceedingly rare for antiquities investigations to end in criminal convictions, and federal prosecutors hope the Markell convictions will act as a deterrent to the market.

“By holding US-based antiquities marketers fully accountable for their role in promoting the antiquities market and thereby stimulating the global destruction of irreplaceable heritage resources, this court has a special opportunity to dampen the trade and encourage others conducting similar enterprises to change their behavior and choices,” White testified.

Here are links to recent court records from the Markell case:

Here is a list of objects seized from the Markell’s home and gallery:

Here is my past coverage of the Operation Antiquity case:

Here is Joyce White’s presentation on the case, “Hot Pots, Museum Raids and the Race to Uncover Asia’s Archaeological Past.”