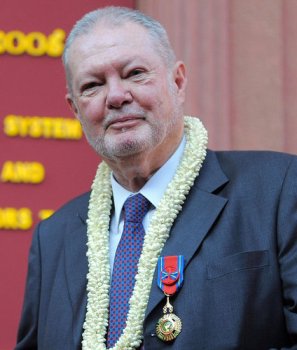 Who is Douglas A. J. Latchford?

That is the question many are asking since the Bangkok-based British collector who describes himself as an “adventurer-scholar” emerged at the center of the legal fight over an allegedly looted 10th Century Khmer warrior now at Sotheby’s.

Federal prosecutors have said in recent court filings that Latchford knowingly purchased the Sotheby’s statue and its companion at the Norton Simon Museum in Pasadena from “an organized looting network” that stole the objects from the ruins of the Koh Ker temple complex deep in Cambodia’s northern jungles. Latchford allegedly conspired with the London auction house Spink to obtain false export permits for the statues, which were transported it to London in the early 1970s, the filings claim.

[Our previous coverage of the Sotheby’s case can be found here.] 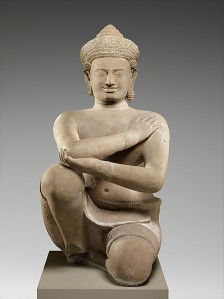 As the New York Times reported in June, Latchford is also listed as the donor of record for two prominent Khmer pieces at the Metropolitan Museum of Art that Cambodia wants back. All four of the statues are believed to have been looted from the ancient temple complex of Prasat Chen and smuggled out of Cambodia sometime in the late 1960s or early 1970s.

Latchford denies the allegations. In an interview this month, he told the New York Times that prosecutors were “weaving together suppositions.” “This is somebody’s imagination working overtime,” he said in an interview at his Bangkok home with reporter Tom Mashberg. He claims that the London auction house Spink at times used his name for purchases of objects he never owned. Spink claims it has no longer has records from those years.

At the same time, Latchford suggested he had a transcendental claim to Khmer art: Buddhist priests once told him he was Khmer in a previous life, “and that what I collect had once belonged to me,” he told the Times. Asked about his early collecting,

Mr. Latchford spins tales of bumping his Jeep along makeshift roads in the jungles of Thailand and Cambodia, exploring vine-entangled temples and the shattered outposts from a 1,000-year-old fallen empire.

He and other well-known collectors, he said, would buy and trade what became available without fretting over the provenance details that govern modern antiquities transactions. They were rescuers, not plunderers, he said, pointing out that he and others have restored, protected, cataloged and donated artifacts that might have been broken into pieces or lost or neglected. 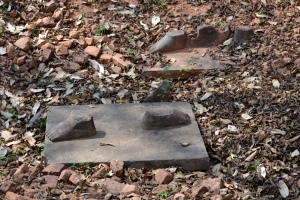 The feet of two ancient sandstone statues were left behind by looters at a temple in Koh Ker, Cambodia. One statue is now at Sotheby’s, the other at the Norton Simon Museum in Pasadena.

The final statement is ironic, as federal prosecutors suggest the statue at Sotheby’s was purposefully broken by looters to make it easier to smuggle, a claim supported by Sotheby’s own analysis of the statue’s surface. Indeed, both statues’ feet remain in place at Koh Ker.

Latchford gave another revealing answer in a 2010 interview with the Bangkok Post when asked where a piece in his considerable private collection had come from:

“The ground,” he answered. “Most of the pieces I have come across in the past years have been excavated, or dug up. You know, there is a farmer in the field who digs something up, and he probably thinks if I take it to Bangkok or Singapore or a middle man I can get $100 instead of getting $10.” 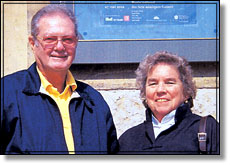 Latchford has close ties to Emma Bunker, the Khmer art expert hired by Sotheby’s to help with the sale of the contested Khmer statue. In emails to Sotheby’s, Bunker stated that the statue was “definitely stolen,” and said her “culture spies” could help Sotheby’s navigate Cambodia’s cultural heritage bureaucracy. Latchford and Bunker have co-authored several books on Khmer art, including Adoration and Glory, which boasts that “the authors were able to gain access to private as well as public collections worldwide to give unparalleled access to more than 150 objects,” many of which are published there for the first time.

Complicating matters, Latchford, now 81, has become a prominent donor to Cambodian museums of both antiquities and money. Emails from the Sotheby’s case make clear his generosity has earned him close ties to cultural officials in the Cambodian government, including to Hab Touch, who is today pressing Cambodia’s repatriation claims but in the past has praised Latchford’s scholarship.

Given this history, we’ve started to scratch around to see where else objects tied to Latchford have ended up. Here’s the first of those reports.

The Denver Museum has six objects in its permanent collection acquired from Latchford, four of them acquired as gifts. Here are details provided by the museum: 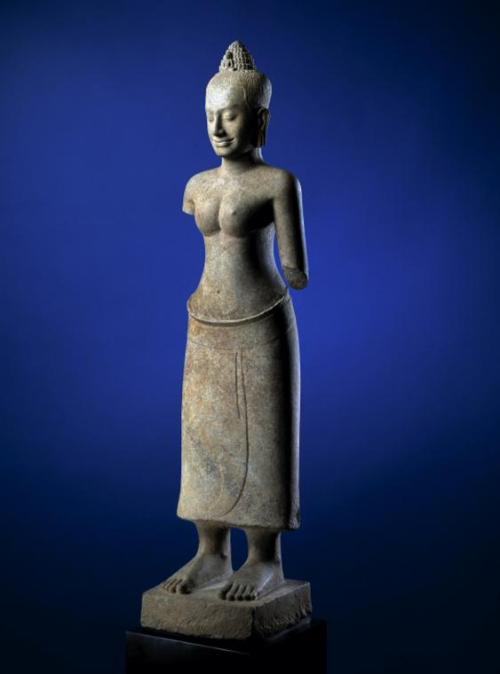 The museum’s website suggests the piece could be from the Bayon Temple at Angkor Thom: “The gentle smile and lowered eyes are features associated with sculptures from the Bayon temple built by Jayavarman VII, the last great ruler of the Angkor royal line.”

The museum said the piece was originally purchased by “Ian Donaldson” in Vietnam around 1964-66; then shipped from Thailand to the UK on February 12, 1994 and imported from the UK on March 10, 1994. It is worth noting that Adoration and Glory contains a very similar statue listed as being in a private collection. 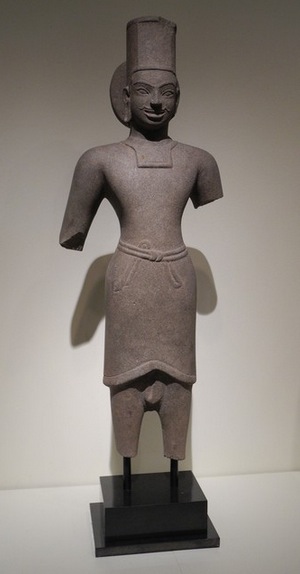 3. Sun God (Surya) from Cambodia or Vietnam. 600’s to 700’s, Pre-Angkor period, sandstone. Purchased from Latchford in 2004. Accession #2004.371. Published in “Adoration and Glory.” No other provenance information was provided.

4.  Sleep of Vishnu and the Birth of Brahma, Cambodia, 700’s, Pre-Angkor period. Sandstone. Gift of Douglas A. J. Latchford. Accession #2005.104. The piece was published in “Adoration and Glory” and listed as being held in an “American Collection” on page 84. No other provenance information was provided. 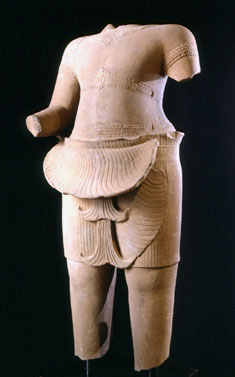 Among the museum’s Khmer objects not included in the list are other objects from Koh Ker, such as this statue of Rama, whose ownership history is not listed.

In short, in recent years the Denver Art Museum has acquired several Cambodian antiquities with little or no documented ownership history — much less evidence of legal exportation — from a man now at the center of a federal looting probe. For several of those objects, the only documented history was a book written by Latchford himself. The museum’s position is further complicated by the fact that Emma Bunker is listed as research consultant for the museum, suggesting a possible conflict of interest. All of these are serious red flags.

In a statement, a spokeswoman for the museum said, “The Denver Art Museum curatorial team conducts provenance research on an ongoing basis and posts results online as they become available both on the museum’s website and on the AAMD object registry. The Museum adheres to AAMD guidelines for the acquisition of archeological materials and ancient art set forth in 2008. In coming into full compliance with AAMD guidelines for antiquities and archeological material, the Denver Art Museum now requires all available provenance information to be provided for new acquisitions.”

The statement suggests a deep misunderstanding of modern acquisition ethics. The moral obligation on museums to obtain clear provenance — concrete evidence that an antiquity had not been recently looted — did not begin in 2008, after the wave of museum scandals we wrote about in Chasing Aphrodite, but in 1970 with the passage of the UNESCO convention. Further, the museum’s postings on the AAMD Object Registry suggest that South East Asian antiquities are not the only problematic collecting area for the Denver museum: it has acquired nine pre-Colombian objects since 2008 that do not have provenance pre-dating 1970.

We’ll follow-up on these matters with Denver, which has still not provided a list of Latchford objects that were lent to the museum.

Meanwhile, if you know of other Latchford material in public or private collections, drop us a line confidentially at chasingaphrodite@gmail.com