UPDATE 5/6/14: The Norton Simon Museum and Christie’s auction house have agreed to return two additional sculptures looted from the Praset Chen temple at Koh Ker, Cambodia, the New York Times reports. The Norton Simon’s Bhima has been on display since the 1970s. Christies sold a looted sculpture of Pandava twice, most recently in 2009, and bought the sculpture back from the anonymous buyer when information emerged about its looted origins. They are the fourth and fifth objects from the looted temple to be returned. Two additional sculptures from the site remain on display at the Denver Art Museum and the Cleveland Museum of Art.

Cambodia is quietly negotiating the return of several important 10th century sculptures that were looted from the temple complex of Koh Ker in the 1970s.

Officials from the Norton Simon Museum in Pasadena recently traveled to Phnom Penh to discuss the fate of its looted Bhima (right). “We have met and had constructive conversations that are continuing,” said Luis Li, an attorney for the museum. Several other museums are also in talks with Cambodia about objects in their collections.

Koh Ker was the source of several iconic Khmer sculptures that were looted in the 1970s and sold to prominent museums and collectors. We’ve previously written about ties between the looters and the murderous Khmer Rouge regime. The most famous of these stolen masterpieces is the Bhima’s companion, Duryodhana, which Sotheby’s attempted to auction in March 2012 on behalf of a Belgian collector. After a lengthy legal fight, Sotheby’s agreed to return the sculpture to Cambodia last December. Months earlier, the Metropolitan Museum agreed to return two Kneeling Attendants looted from the same site. Additional sculptures from the site have been identified at The Cleveland Museum and the Denver Museum of Art. [Complete coverage here.]

This New York Times graphic shows their original locations in the ruined temple of Prasat Chen:

While the returns are being negotiated by Cambodian authorities, archaeologists with the French School of Asian Studies (EFEO) have been busy reconstructing the Koh Ker temples with the tools of virtual reality. By sewing together thousands of digital pictures of the sculptures into 3D images, they’ve re-created their original context in the now ruined temples. At EFEO’s website you can watch a remarkable video showing what the site might have looked like soon after its construction by Jayavarman IV.

One of those behind this work – and some of the original detective work that linked them to the temple – is French archaeologist Eric Bourdonneau. He graduated from the Sorbonne with degrees in Archaeology and Oriental Studies. His 2005 Phd was entitled “Indianization and Formation of the State in South-East Asia: A reappraisal of the Historiography of the last Thirty Years.” He has been a lecturer at the EFEO since 2007.

Here’s my Q and A with Bourdonneau.

Q: How did you become involved in the case involving the Duryodhana at Sotheby’s? 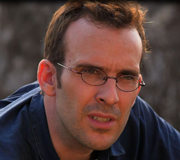 Let’s talk first about the Bhima statue at the Norton Simon Foundation.* As far as I know, the connection between the Prasat Chen and this statue (published in Bunker and Latchford 2004) seems to have been made for the first time by a member of the GACP team (a stone conservation German project) who sent a short letter to Unesco in 2007 (I was informed about this letter quite late in 2011). Personally, I saw the pedestal of the statue during the first archaeological campaign I made in Koh Ker in 2009. I made also the connection with the Norton Simon statue that I identified then as a statue of a fighting Bhima … and so concluded that the other pedestal close at hand was for a Duryodhana. But, at that time, I didn’t know of any image of this Duryodhana. 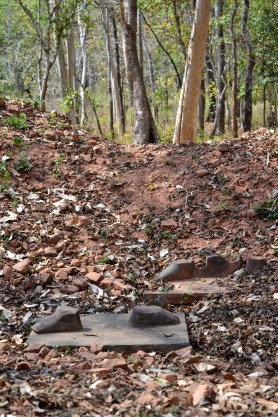 The feet of the Duryodhana and the Norton Simon’s Bhima in situ in Koh Ker.

I saw it for the first time at the end of 2010 when I presented my work to my colleagues of Guimet Museum, Pierre Baptiste and Thierry Zéphir. They showed me a photo of this statue, a photo that was in the Museum Archives but with no information about its origin, its identification or its localization. The next step was just one week before the sale in New York (March 2011). I was informed almost by accident (I was probably the last one to be informed among those concerned by the sale…). Ironically it was a collector that told me that a statue of “Koh Ker style” would be on sale. I prepared straight after a report (with photos, dimensions and iconographical “demonstration”) and sent it to Unesco office in Phnom Penh (where people were wondering about the authenticity and the provenance of this statue) and this report, I was told, was immediately transmitted to Cambodian Ministry of Culture.

I also made several presentations since 2009 and published a quite long article in 2011 where I explained why these statues should be identified with the two images of Bhima and Duryodhana at Prasat Chen and why there was little doubt that the two “Met pieces” (the Pandava brothers), among others, came from the same building.

Q: How did you ultimately make the match between the sculpture and its feet?

The abandoned feet at Koh Ker superimposed on the Temple Warrior at the Norton Simon, from a report to UNESCO by researcher Simon Warrack.

It is not so difficult. The position, the style, the dimensions (e.g. dimensions of the breaks at the ankles, taken in situ) left not much doubt. It is a little more difficult to show that such a statue could come only from Prasat Chen and not from another temple. The iconographic analysis is essential for that.

Q: Have you found any other matches to objects missing from Koh Ker or other Cambodian sites? Where are these objects today?

There are indeed a quite significant number of similar cases. The most obvious are those for which where we have photos in the archives: for example, the Ganesha from Prasat Bak or the lion (right) from the Shiva pedestal in Prasat Thom (and today in Dallas Museum). Many of them are now in private collections so it is not easy to know their current location. At least it is possible to know when and where they were sold thanks to sale catalogues published by auction houses.

Q: The Duryodhana and the Met’s Kneeling Attendants have been returned. Others may soon follow. Where will these objects be displayed in Cambodia? What significance does this have for the local people?

I have no precise information about this. But, of course, they will be exhibited. You better have to ask to Cambodians themselves. Obviously they have many reasons to be proud of their heritage and to celebrate the return of these remarkable pieces. It is important to remind what we are talking about: a deliberate destruction that did not care about the integrity of the artworks, provided that there were people ready to purchase them.

The state of conservation of these artworks in stone was remarkably good as they were still buried when looted. It is maybe not useless to say again, as Elizabeth Becker rightly wrote in NY Times, that the fury of the Khmer Rouge was, sadly, directed much more against people than stones: in Koh Ker, the only traces of vandalism, of which there are many, ­are those left by the modern looters whose spoils fed the art market (some of them can be seen on the knees of the two “MET statues”, cut hastily and coarsely from their pedestals with dozens of blows of a chisel).

It is hardly understandable how the purchasers of the objects could be “rescuers” working for the protection of heritage, as it has been said. As you know, they actually were those to whom the damaged statues were destined and the unique raison d’être of this vandalism. For this same reason, they are certainly not working for a better “understanding of Khmer culture.”

The so-called Sotheby’s or MET statues, like many of their kind extracted from their original surroundings, have remained impossible to understand as long as we have not been able to replace them in the temples where they were erected, that is, as long as we have not restored what was destroyed forty or thirty years ago by the looters.

What is at stake here is not only “heritage” but history.

*We’ve edited Eric’s response to make clear he was referring here to the Bhima, not the Duryodhana.