Interview with Madeleine Brand on KPCC

Jason’s interview with KPCC’s Madeleine Brand aired this morning. Madeleine loved the book, saying it “read like an international thriller.” You can listen to the podcast here:

A wonderful documentary (in Italian) showing the return of the Getty goddess to Sicily has been posted by Sicilian news site ViviEnna. You can see images of the statue’s installation and exhibition in the archaeological museum in Aidone, as well as shots of Morgatina, the nearby ruins where the statue was illegally excavated in 1979.

VOA on the illicit antiquities trade

VOA's On the Line

Voice of America’s international TV program “On the Line” interviewed Jason Felch about the international trade in illicit antiquities.

You can watch the program here. (The antiquities segment starts at 11:30, about half way through the show.)

Review and Interview with ARCA

The Association for Research into Crimes against Art has posted a great review of Chasing Aphrodite and an interview with Jason about the recent return of the Getty goddess.

Q: How did you feel, being so close to this story, seeing “Aphrodite” being returned to her homeland? Did you understand more about the statute by visiting the area she came from?

A terracotta Persephone on display in the same gallery as the goddess. Many experts now believe the Getty goddess is not Aphrodite.

Jason: We were thrilled to be able to attend the inauguration of the Getty goddess in her new home in Aidone, Sicily. For both Ralph and me, the trip — which coincided with the release of Chasing Aphrodite — really brought a feeling of closure to our own “chase,” which began more than six years ago. Seeing the goddess — can’t really call her Aphrodite anymore — in Sicily brought up some bittersweet feelings. The archaeological museum there sees about 17,000 visitors a year, far fewer than the 400,000 than visit the Getty Villa. Sicilian officials are hoping the goddess’ return will change that, but certainly fewer people will see her now, and LA has lost an important masterpiece. That said, it was VERY powerful to see the statue in her new context, a stone’s throw from Morgantina, the Greek ruins from where she was looted in the late 1970s. Surrounded by eerily similar figures depicting the fertility goddesses Persephone and Demeter, the statue takes on a startling new meaning.

If you don’t know it, ARCA is an interdisciplinary research group on issues of art crime. In addition to publishing the biannual peer-reviewed Journal of Art Crime they host conferences and publish a good blog here.

In Sunday’s New York Post, Ralph describes how the Metropolitan Museum of Art in New York narrowly avoided becoming the center of the antiquities scandal that consumed the Getty Museum.

“A few years ago, the world’s richest arts organization became the epicenter of a scandal that, like revelations of steroid use in baseball, exposed a dirty little secret of the American cultural establishment. 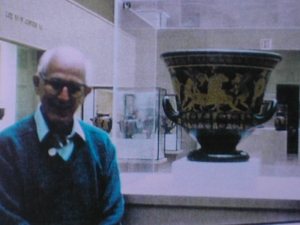 It was revealed that the J. Paul Getty Museum of Los Angeles, along with other American museums, had long been involved in the black market for looted Greek and Roman antiquities — a trade the museums themselves fueled with multimillion-dollar acquisitions of illegally excavated masterpieces.

To stop the cycle, Italian authorities took aim at the biggest customer, the Getty. A Roman court indicted the Getty’s antiquities curator, Marion True, for trafficking in looted objects. The Getty eventually expelled its most generous living donor, Manhattan socialite Barbara Fleischman, from the board for her involvement in the scandal. And the Getty was made to pay for its crimes by returning 40 of its best antiquities to the governments of Italy and Greece.

But had things gone a bit differently, what is now known as the “Getty scandal” could have very well have been the “Metropolitan Museum meltdown.”

Only timing, luck, and a grudging act of cultural contrition saved the venerable New York institution from taking the biggest fall.”

Listen to the program here.

In Wednesday’s Los Angeles Times, Jason Felch reports on the ceremony officially inaugurating the Getty’s controversial statue of Aphrodite in its new museum home in Aidone, a small hill town in central Sicily.

“A chaotic scrum of politicians, journalists, townspeople and two Getty officials crowded into the small museum in a former Capuchin monastery to see the 7-foot statue of limestone and marble, which the Getty bought in 1988 for $18 million despite signs that the statue had been recently looted and smuggled out of Italy.”

The statue’s return to the land where it was believed to looted from more than 30 years ago has ignited dreams of economic revival in Aidone, where ironically many locals supplement their meager incomes by plundering and selling off ancient artifacts from nearby Morgantina, one of the Mediterranean’s most productive archaeological sites.

The limestone-and-marble goddess remained impassive in the face of the chaos and pomp of the day. She was celebrated by hundreds of citizens who braved the cold drizzle to hear two bands dressed in elaborate uniforms and speeches by local officials sporting with red, white and green sashes. Inside the Aidone museum, a children’s choir serenading politicians. Celebrants were rewarded with free Aphrodite postcards, Aphrodite t-shirts and Aphrodite note pads. Across from the museum, a Aphrodite souvenir shop was doing a brisk business in imitation Aphrodite Greek vases, Aphrodite dishes and Aphrodite cigarette trays.

On the eve of Aphrodite’s official return home, co-authors Jason Felch and Ralph Frammolino gave a presentation at a Sicilian university tracing the odyssey of the ancient statue from illicit excavation to controversial debut at the J. Paul Getty Museum and its symbolic role in the recent scandal that rattled the American art establishment.

“Felcholino,” as we were once dubbed by an arts blogger, were guests of Kore University in Enna, about 30 kilometers from when the Getty’s Aphrodite was dug up nearly 30 years ago. More than 150 students, faculty and local public officials attended the May 16 event, which served as the official debut for the book in Europe.

We recounted oil tycoon J. Paul Getty’s “addiction” to ancient art and how his eponymous museum inherited both his money and compulsion. Its $18 million purchased of the cult statue signaled the museum’s foray into an art market awash in looted artifacts.

The Getty’s voracious purchase of dodgy material led to the 2005 criminal indictment of its antiquities curator by a Roman court, triggering a scandal that revealed to what extent American museums had lied about patronizing the black market.

The presentation was made a day before the Fifth Century BC statue was officially inaugurated in its own room of the nearby Aidone museum. The event was covered by local and national Italian media, including one of Italy’s largest television networks.

The most popular question: Did they ever feel their lives were in danger from the Mafia?

“Even those we talked to, those considered ‘dangerous people,’ were gracious in the finest Italian tradition,” said Ralph.

Jason added: “We never had any direct threats but then again sometimes your life can be threatened and you won’t know about it.”

Afterward, we were treated to a sneak peekof the statue in its new home and a tour of the Morgantina dig site, form where many now believe the goddess was looted.

In Wednesday’s LA Times, Jason Felch writes about the awkward marriage of a reformed Getty and its new CEO, a hawk on antiquities collecting.

“In naming James Cuno president and chief executive of the J. Paul Getty Trust, its board members surprised many in the art world by choosing a staunch defender of the unfettered acquisition of ancient art to lead an institution that, after a decade of scandals, has all but abandoned the practice.

Since 2001, when the Getty’s former antiquities curator Marion True was charged in Italy with trafficking in looted art, the Getty has returned dozens of ancient masterpieces it concluded were found through illegal excavations. More recently, the Getty has emerged as a leader in efforts to curb the looting that has fueled the market in ancient art.

Over that same decade, Cuno, 60, forged a reputation as an outspoken critic of efforts to curb the antiquities trade. In two books and many public appearances, he has called the efforts of foreign governments to regulate the trade in ancient art “nationalistic,” and has lamented the limits put on museums’ ability to collect art that has a murky ownership history.”

The upshot: “Cuno’s awkward embrace of a point of view he has long criticized creates a potential stumbling block for the Getty, which today relies heavily on cooperative relationships with Italy and other nations Cuno has openly criticized.”

Years before Marion True became antiquities curator at the Getty, her predecessor Jiri Frel orchestrated one of the most elaborate tax frauds in American museum history. At its center was the donation of recently looted antiquities at inflated values. To this day, those object form the core of the museum’s “study collection.” The story of the rogue Czech curator and the cover-up of his criminal activities are captured in an excerpt from Chasing Aphrodite in this month’s Los Angeles Times Magazine.

You can find the excerpt here.