UPDATE: The National Gallery of Australia announced Thursday that it is seeking to return its stolen Shiva, purchased from Kapoor in 2008 for $5 million, and will pursue a lawsuit against Kapoor. See below for details. 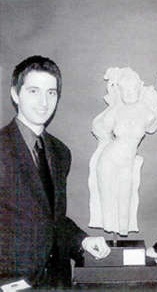 For nearly two decades, Aaron Freedman, 41, managed Art of the Past on Madison Avenue, a major supplier of ancient art to museums and private collectors around the world.

During that time, court records say, Freedman helped Kapoor manage a global network of looters, thieves and smugglers who pried artifacts from temples and ruins, laundered them with forged ownership histories and sold them to some of the world’s most prominent museums and collectors.

“He arranged for the shipping into and out of the United States of antiquities stolen from numbers countries including, but not limited to, India, Afghanistan, Pakistan, and Cambodia, having the antiquities shipped through intermediaries in order to create documentation to help launder the pieces,” the court records say. “He also arranged for the manufacturing of false provenances for illicit cultural property, the contacting of prospective buyers, and the ultimate sale and transport of those looted and thereafter laundered antiquities.”

In a court appearance Wednesday, Freedman pleaded guilty to one count of criminal conspiracy and five counts of possession of stolen property, according to a spokesman for  the Manhattan District Attorney’s office. His attorney Paul Bergman did not return calls for comment. According to an online profile, Freedman graduated from Vassar College before studying Art History at Rutgers University. He started work at Art of the Past in 1995.

UPDATE: Bergman told The New York Times his client was eager to “take concrete steps to rectify his serious mistakes.” The prosecutor on the case was quoted by the Times saying, “Mr. Freedman, I believe, is sincerely and genuinely remorseful and repentant and he has taken significant steps toward making amends.” It appears likely Freedman will be cooperating with investigators.

Freedman’s boss Subhash Kapoor is now in custody in Chennai, India where he is facing trial as the alleged mastermind of an international antiquities smuggling ring. Federal investigators have described Kapoor as one of the most prolific antiquities smugglers in the world. In a series of raids on his New York gallery and storage facilities, agents have seized an estimated $100 million in art. They are now in the process of tracking down objects he sold to museums and collectors around the world. [Find all our past coverage of the Kapoor case here.]

Since 1974, Kapoor has sold or donated thousands of pieces of ancient art to the Metropolitan Museum of Art in New York City, the Los Angeles County Museum of Art , the Norton Simon Museum, the Asian Art Museum of San Francisco, the Art Institute of Chicago, the Toledo Museum in Ohio and others. Abroad, his clients included the Musée des Arts Asiatiques-Guimet, Paris; the Museum of Asian Art in Berlin; the Royal Ontario Museum in Toronto; the Asian Civilisations Museum in Singapore; and Australia’s National Gallery and Art Gallery of New South Whales.

The court records filed Wednesday detail several stolen objects that Freedman and Kapoor attempted to sell to museums and collectors.

The most important has not previously been revealed: a nearly 7-foot tall 2nd Century BCE sandstone sculpture from Bharhut stupa, in central India. Kapoor priced it at a staggering $15 million, calling it “the most significant example of Indian sculpture known to exist outside of India.”

In his gallery’s promotional materials for the sculpture, Kapoor stressed the object’s importance and rarity: “The Bharhut Stupa is one the most important monuments for the history of stone sculpture in India, as it was one of the first Buddhist monuments to have used stone extensively in its construction. In addition, the Bharhut Stupa was one of the most important destinations for pilgrims in its time.”

“The material remains from Bharhut Stupa are extremely limited, and, therefore, incredibly rare. Aside from a handful of museums in India (the Allahabad Museum, the Indian Museum in Calcutta, and the National Museum in New Delhi) there is no collection in the west, except for the Norton Simon Museum in Pasadena, California, that has anything worth mentioning from this all-important site. The Norton Simon Museum has two well-known railing pillars from the Bharhut region that were acquired in the late 1960s….”

In a letter to a potential buyer, Freedman said the sculpture had “become available from an old private collection.” Investigators say it was stolen from the private residence of an Indian man who reported the theft in 2004.

This 11th Century Chola sculpture of Uma Parameshvari, the Great Goddess, standing in her sensuous thrice-bent pose, was stolen from the Sivan Temple in India’s Ariyalur District in 2005 or 2006, according to the court records.

Kapoor sold it to Singapore’s Asian Civilizations Museum in February 2007 for $650,000, records show. His contact there was the museum’s senior curator Dr. Gauri Krishnan.

Also cited in support of Freedman’s criminal charges are four missing Chola sculptures worth $14.5 million that authorities allege were hidden by Kapoor’s sister, Sushma Sareen. As we reported in October, Sareen was criminally charged for her role in the case.

The final piece mentioned in the court records is the National Gallery of Australia’s sculpture of Shiva, purchased for $5 million in 2008. As we revealed in June, the sculpture was stolen from the Sivan Temple in Tamil Nadu.

UPDATE 12/5: The National Gallery of Australia released the following statement after learning about Freedman’s plea agreement:

The NGA’s Chola-period Shiva Nataraja is among the items listed as being illegally exported from India. This information represents a significant and concrete development in the available information regarding the Kapoor case. The Gallery has instructed its American attorneys to commence legal proceedings against Subhash Kapoor in accordance with the provisions of our acquisition agreement. NGA Director Ron Radford has already contacted the Indian High Commission to discuss avenues for restitution…

Freedman is due back in court on February 4th for sentencing. The Superior Court Information on his case, NY vs. Freedman (No. 2013NY091098) can be found here:

This entry was posted in News and tagged Aaron Freedman, Art of the Past, Bharhut Stupa, National Gallery of Australia, Norton Simon Museum, Subhash Kapoor, Toledo Museum. Bookmark the permalink.