Abbott will personally deliver the National Gallery of Australia‘s $5 million Dancing Shiva and the Art Gallery of New South Wales‘ $300,000 Ardhanarishvara to Modi as a “gesture of good will” at a state reception at the Indian presidential palace, the Australian’s Michaela Boland reported in Friday’s paper (front page seen above.)

As we first revealed here a year ago, both objects were stolen from temples in India and later sold to the museums by Manhattan dealer Subhash Kapoor, who, his gallery manager has admitted, created falsified ownership documents to hide their illicit origins.

The Australian returns mark the first major repatriations in the Kapoor case, but are unlikely to be the last. Dozens more Kapoor objects acquired by the Australian museums were sold with false ownership histories similar to those used with the returned objects. Several will likely play a prominent role in Kapoor’s criminal trial in Chennai, India, which has been on hold pending the return of the NGA’s looted Shiva. (below)

Meanwhile, Kapoor’s international network of looters and smugglers is still being mapped by authorities in the United States, who have already seized over $100 million in art from the dealer’s Manhattan gallery and storage facilities. Federal investigators in the United States are methodically working through mountains of evidence seized from Kapoor, probing his ties to a number of American and foreign museums that did business with the dealer. Indian authorities, meanwhile, are considering a broader campaign to reclaim stolen antiquities from foreign institutions. 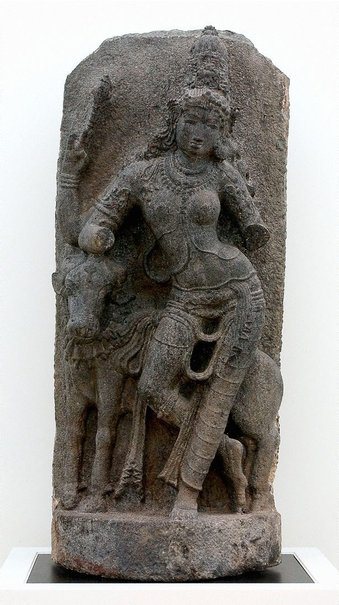 Over the past two years, we’ve traced hundreds of suspect Kapoor objects to museums around the world. To date, the Kapoor case has received the most attention in Australia, whose National Gallery for months stonewalled press and government inquiries and dismissed mounting evidence before agreeing to take the stolen idol off display. The Art Gallery of New South Wales took a slightly more proactive approach, releasing the ownership history that Kapoor supplied for its sculpture of  Ardhanarishvara (left.) Soon after, Indian art blogger Vijay Kumar identified the temple from which the sculpture was stolen.

The idols have been in the Australian government’s possession for months, but their fate remained unclear until today. The According to The Australian, Abbott decided during a July dinner with George Brandis, Australia’s Attorney General and Arts Minister, to present the idols to Modi during his two-day state visit to India. “Brandis told him the issue was a potential problem in the relationship between the nation­s and Mr Abbott said returning the statues would be an important statement of goodwill towards the Indian Prime Minister, elected to office in May,” the newspaper reported.

Underscoring the diplomatic importance of the returns, Abbott reportedly wanted to have his presidential plane transport the objects directly but they were too heavy and were dispatched on Wednesday by jumbo jet instead.

Meanwhile, the National Gallery officials who played a key role in acquiring the Shiva – despite the warnings of their own attorney – are quietly exiting the scene. Curator Robyn Maxwell, who handled the negotiations with Kapoor, retired quietly last month, the Australian reported. Director Ronald Radford will retire this month, his legacy tarnished by his mishandling of the case. The Art Gallery NSW’s Michael Brand, who has taken a more open approach to looting investigations in Australia and previously at the Getty, has been mentioned as a possible successor.